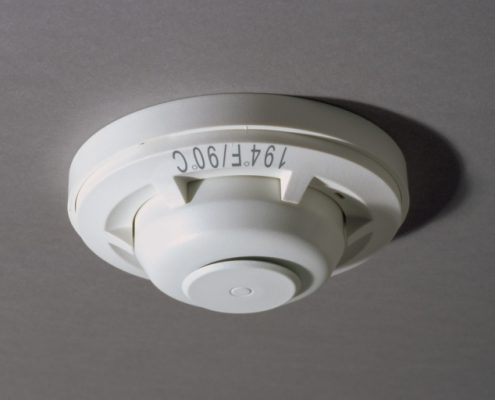 Unlike the photo detector the Ion smoke detector does not use an LED to look for smoke particles. Instead inside the detector is extremely small radioactive particle, typically Americium-241. The chip of Americium-241 is so small that it is harmless to us and can’t even penetrate a piece of paper.

Inside the detector along with the americium are two metal plates called electrodes. The electrodes are connected to a power source. one plate is positive and the other negative. When air enters the smoke detector the Americium-241 ionizes the air particles causing the air to become excited causing increased ion mobility. This increased mobility causes the air to become a better conductor and allows electricity to pass easily between the plates. The electronics inside the detector register this electricity typically as voltage and use it as as reference.

When combustible smoke particles enter the detector’s chamber they are attracted to and attach themselves to the ion particles. This causes the particles to less excited reducing mobility, lowering conductance and causing the voltage passing between the plates to drop. This change is measured against the reference voltage and when lowered enough cause the detector to go into alarm.